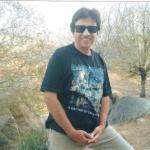 If you didn’t really know what it was, it could be very well be mistaken for a name of an exotic cocktail from South America!! Not exactly close, but Rawla Narlai is the name of a sleepy hamlet tucked away neatly in the state of Rajasthan between Jodhpur and Udaipur.

I had once read that Mick Jagger had visited the place and I wanted to see what his tastes were like, so decided to follow in the footsteps of the great rock singer. Anu, my wife, is fond of trains rather than planes, and so we took the Mandore Express from Delhi to Jodhpur. The train has only one compartment with AC I Class, providing comfort and privacy, and we arrived at 8 AM at Jodhpur Station. Greeted by Shyam the driver from our local Agent in Jodhpur, we were driven to Hotel Ajit Bhawan for breakfast.

Leaving the town of Jodhpur behind, we entered the Thar Desert area. The route took us through arid landscapes dotted with the local kikar trees. One could see the local Black Buck ( reverred by the Bishnois in the area) munching on the thorny bushes, scattered in ones and twos across the open sandy countryside. Rajasthan has an eeries sense of calm at all times, and nowhere is it more pronounced than in the sandy regions. A pleasant ride of 2 hours gets you to a bend in the highway from where one suddenly looks onto a high outcrop of rock – a virtual hill about 350 feet high. This is an important landmark of  Rawla Narlai and we have arrived. 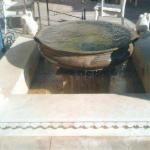 The way to the hotel winds through narrow lanes and streets. The 17th century fortress was owned by Umaid Singh, the erstwhile Maharaja of Jodhpur and used as a Hunting Lodge. It was gifted it to his younger brother, Maharaja Ajit Singh and his son, Maharaj Swaroop Singh, converted it to a ‘Heritage” hotel. The Hotel itself merges into the village and the only thing that gives it away is its massive white walls, a sturdy iron gate and the Royal family insignia flag fluttering at the top. A traditional welcome awaits us with wet towels and a cool Nimbu Pani drink.

The Hotel has an ‘old’ section which has been preserved as it was – with painted ceilings, high poster beds, family artefacts and framed pictures on the walls. Some of the room retain the orginal frescoes on the walls, and the furniture as well. And then there is the new wing that has been added in, elegantly designed by one of India’s famous designers, Raghevendra Rathore with niches, chandeliers, coloured glass and swings. We sit on a “dewan’ in the garden and unwind with our books – at peace and content – and marvel at the greenery all around. A virtual oasis in the desert! A chilled beer and delectable food served in the bar, and we are happy.

The next day we venture out of the hotel on foot. It is a very warm day and we swim in the pool. Later, when the sun has lost its fiery glow, we walk to the local Mandir ( Temple)

that has been built as an extension to the old one. The village is very big as compared to usual villages. It is bustling with activity. There are proper cobblestone lanes, ‘pucca’ 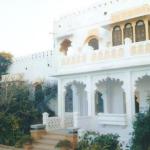 houses with proper drainage and very clean. We chat with a local school teacher who informs that most of the residents are quite well off and the village boasts of some 7 Governemnt Schools in all – a very high figure indeed! Many youngsters have studies and left the village for greener pastures in the surrounding towns and big metro cities. Each of them is sending money back home to sustain the family and the general standard of living is fairly good. This is a trend to be seen in most of the villages of Indian now.

Retracing our steps, we walk to the foot of the massive granite rock which seems to be overseeing the welfare of the village. It is about 4.30 PM and the sun has lost its fiery sting. We start our climb and there are some 600 steps leading up to the top. With frequent stops by Anu to ‘catch her breath’, and taking the opportunity to look over our shoulders at the village far away down in the bottom and the Rajasthani countryside all around us, we make it to the top. A loudspeaker is blaring hymns from a small temple located in a rock cave. We meet the priest who is residing here for  past 10 years. He explains that he is from the state of Bihar. Talks briefly to us and tells us that he is here for the peace and tranquility. Another 100 yeards and we come across a statue of a White Elephant. It is on the highest point of the rock and serves as the “caretaker” of the village. Supposed to be an incarnation of Lord Janaka . We spend some time on the top – looking out onto the Aravalli Hills, the desert landscape and get beautiful pictures of the setting sun. The walk down is easier than the one going up!!! 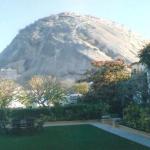 We have signed up for the “Stepwell Dinner” and join a select band of foreigners ( we are the only Indians in the group). We are fitted up with traditional ‘tie and die’ Rajasthani Turbans and taken for a ride in a bullock cart through the village, which ultimately leads onto a forested area. The pitch black darkness around us is broken only by the soft glow of the moon above, and we finally stop at a clearing which boasts of a Stepwell. The most impressive impact is of the myriad oil lamps that decorate the place. As we make ourselves comfortable with drinks, we spot a “fakir” sitting in the bottom of the stairs, his old wizened face ash covered face set aglow by the reflection from the log fire in front of him. He plays his “Ektara” ( a one string Rajasthani instrument ), and sings religious hymns with a lot of fervor. We are offered cocktails with local snacks and we sip and chat away.

The tables have been laid out for couples and it is an intimate affair. The “Thali dinner” is served in five courses and there is plenty of it.

The eerie glow of the lamps, the darkness all around, the moon above and the soulful music combine to lend an eerie touch to the occasion. We have a hearty meal and are then led back in jeeps to the Hotel for a well deserved rest.

You may have been to many places in Rajasthan but Rawla Narlai is certainly worth it. A well-kept secret till about a few years ago, it is a destination that is worth exploring when next in those neck of the woods!! Go check it out!