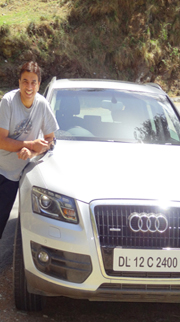 Anu, my wife, had read about a place named Thanedar in the Shimla Hills and so taking a break from the office routine, we decided to hit the road in our Audi Q5.
Our houseboy, Bishnu (a Nepali named after Lord Vishnu from the Hindu mythology), has been working for us for past 15 years, and has become an expert in packing a picnic basket for us for our sojourns. So after two hours of driving, we pulled off the highway into some fields and had our breakfast of boiled eggs with peanut butter-honey sandwiches and hot tea. Breakfast never tasted so good!!

The highway to Shimla leads through the town of Chandigarh. Shimla is a distance of 350 kms from Delhi. Highway NH-1 is new, and excellent by Indian standards. We made good time and arrived at Hotel Oberoi Cecil at about 4 PM. One parks the car in their garage and they transfer you to the Hotel. A hot cup of tea and it was time to take that “must-do” walk on the Mall. Shimla was famous on account of being the summer capital of the British, and even today, one can see and feel the ‘flavour’ of the British Raj present in its administrative buildings, as well as in the old wooden houses with sloping roofs, that have maintained their past glory of a bygone era. The Delhi summer rush had not yet arrived and we admired the cleanliness, ate Idlis with Sambar at the famous Coffee House, strolled on the Ridge, took pictures in front of Gaitey Theatre ( my father used to perform in plays here in the 1950s), made our way thru the winding busy lanes of Lakkar Bazar and then meandered our way back to the Hotel in time for dinner.

The next morning, we drove out of town, winding our way through Kufri and Thun. The traffic was minimal and it was a sheer pleasure to drive. Stopping at a palatial house, we interacted with an old “Pahari” lady who permitted us to take photographs of the cherry blossoms in the garden she was supposed to be guarding – also casually remarking that the place belonged to Mr. Amarinder Singh, the former Chief Minister of Punjab. No wonder the flowers looked so good and we took a lot of photographs. 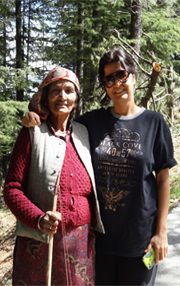 One gets off from NH-22 at Narkanda to take a smaller side road. There is winter snow on the ground which has not yet melted. The altitude is 8600 ft and the air is chilly. We have our lunch at a small wayside “Dhaba” ( Indian roadside cafe) and continue driving through beautiful coniferous forests. Distance from Shimla to Thanedar is about 80 Kms. After about two hours of winding roads, we enter an area where hillsides are covered with “white covers” in the distance. We finally enter a village which suddenly boasts of well-to-do houses and lots of cars parked all over. As we drive along, we spot a wooden board outside a two storey set amidst lush apple orchards. We have arrived at “Banjara Camps” in Thanedar.

Mr. Bittoo is the Manager and makes us comfortable in a “villa” ( one of the two that they have). We are situated in an orchard facing the Shimla Hills. The trees have small flowers on them and the orchard is literally awash in white. The customary evening cup of tea and snacks revives Anu, and later that evening, we head out from the village for a walk. Small shops selling basic necessities line the sides of the road as we nod a ‘Hello’ and exchange pleasanteries with the locals. We are soon headed out of the village. Deep down, one can see the River Sutlej wind its way through the hills. Dusk is approaching and birds are chirping all over. I spot a Scarlet Minivet in the bushes, and my evening is made! 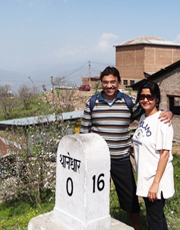 Samuel Stokes, a young Quaker American from Philadelphia, decided to travel to India to do “social work”, and arrived in these parts in 1904 at the tender age of 21. He served amongst the lepers in the area and later, when a severe earthquake hit Kasauli, he was instrumental in helping the local administration in identifying the right people deserving compensation. As time went by, he became fond of the locals and Samuel came to settle in the Shimla Hills. And more precisely, it was in the village of Thanedar that he married a local belle named Agnes, a Rajout Christian, and set up home. Samuel visited USA once and returned with some apple seeds – and they happened to be the first apple seeds to be planted in India! And that is the reason why the Thanedar area is the heart of the apple growing region. And the local farmers are reaping the riches today of the good work done by Samuel Stokes so many many years ago. Later on in life, Samuel was greatly influenced by Mahatma Gandhi and became close to him and his philosophy. He interacted extensively with the great leader and was influenced to such an extent that he changed his name to Satyanand Stokes. In the village of Thanedar, one can see the building that was the original home of Mr. Stokes. Today, his granddaughter, Ms. Vidya Stokes, is a popular local politician.

The next morning at breakfast, we meet Mr. Prakash, the owner of the property who explains the “white covers” that dot the hillsides. These are special plastic covers meant to protect the apple blossoms from hail. We take pictures of the blossoms. Mr. Prakash points out to the coniferous tree lining the hillside in the distance and points out the way to it for a hike. We pack a back-pack and start descending through the village- heading for a Missionary School at the end of the forest. 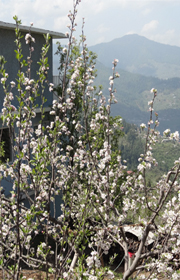 The trail leads through the village and every house is full of apple trees. The local people are polite and educated and wish us good tidings and we reciprocate. Slowly, we are out of the village and on a dirt track, walking through lush green coniferous forest. There is a slight nip in the air and it is a pleasant walk. Anu and I hold hands, and tell ourselves that it cannot be more perfect than this! Finally, after an hour, we arrive at a Church. Two caretakers, in the School adjoining the Church, inform us that the Church opens for service on Sundays only. The Missionary School has almost 80 local children who come to study. While we sit chatting with the two, it starts to rain, accompanied by hail. And then as soon as it starts, it stops. Dark clouds are gathering all around and we adieu to our ‘new found friends’, deciding to make our way back to the village as fast as we can. As we trek through the forest, we find an empty green patch, and have our lunch – making sandwiches of bread, cheese, cucumber, tomatoes and potato chips, washing them down with ginger ale. And as we trudge on, the rain comes again. We are wet. By the time we get to the outskirts, hail starts to come down thick and fast – with a ferocity that Anu and I have never seen before. As we take shelter in a covered verandah of an abandoned house, the ground gets covered in a thick layer of hail almost 2 inches thick and right in front of our eyes, an apple tree, bombarded by the force of the hail, begins to lose its flowers and buds. And soon the tree is naked of all its glory!! 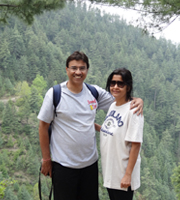 After about 20 minutes, the rain drops to a drizzle, and we trudge back through the slush. The temperate has dropped suddenly and we are cold. There is a kind of “mini flood” in the village and we take a lift from a passing car to our Hotel. The staff prepares us some hot ‘Chai’ and ‘pakoras’ and we finally regain our composure. And then we sit in our small balcony and look upon the bue and pink hues changing colours in the evening sky above the Shimla Hills. What a day!!

The next morning is bright and sunny, but we set eyes on a devastated sight. The garden and hillsides, so beautiful and full of blossoms, are gone. The tree trunks and branches are devoid of all beauty as they stand silhouetted bare against the blue sky. Only the trees with the plastic ‘covers’ have got saved. Mr. Prakash., with a heavy heart, informs at breakfast time that losses, worth hundreds of thousands of dollars in apple crop, has been suffered by the locals in that one fateful hailstorm!!

It is time to head back home today, and as we bid farewell to Mr. Prakash and the staff, we cannot but share a sense of loss and doom, and empathize with the people of Thanedar. But such are the trials and tribulations of life, and tommorrow will be another day!! We assure them that we will be back some day again – to enjoy the beauty of the apple blossoms, the legacy of Samuel Stokes and the mesmerizing beauty of Shimla Hills.

P.S : If you proceed further onwards from Thanedar, one can reach Rampur and then Kaza in the Kinnaur district of Himachal Pradesh. From here, one can visit the famed Sangla Valley. Can also make a circuitous route to Manali from here.